On the name; Philip K. Dick helps; ceasing to be an asshole

A friend of mine told me, very mat-toe-uh-fackly, that I write this blog because (quote) I want people to think like me... (end). I disagree, that's what I tell myself. My most dependable explanation for the writings I collect in this digital place: I want to work with my thoughts, (you know, test them out, see how they roll — rather than blindly accepting them) and, when I find something that might by enjoyed by another Youman Being, I offer it — from there, I'm not really involved (it's not like I get a lot of follow up questions, most of the discussions about the posts happen before they're written).

The name, what the Tee Vee taught, might be worth an explanation. Philip K. Dick, years before I was birthed, said this:


TV viewing is a kind of sleeplearning. An EEG of a person watching TV shows that after about half an hour the brain decides that nothing is happening, and it goes into a hypnoidal twilight state, emitting alpha waves. This is because there is such little eye motion. In addition, much of the information is graphic and therefore passes into the right hemisphere of the brain, rather than being processed by the left, where the conscious personality is located. Recent experiments indicate that much of what we see on the TV screen is received on a subliminal basis. We only imagine that we consciously see what is there. The bulk of the messages elude our attention; literally, after a few hours of TV watching, we do not know what we have seen. Our memories are spurious, like our memories of dreams; the blank spaces are filled in retrospectively. And falsified. We have participated unknowingly in the creation of of a spurious reality, and then we have obligingly fed it to ourselves. We have colluded in our own doom.

I freely admit that much of this — to me — is unknown or nonsense. An EEG? Huh? What the fuck is an alpha wave? Colluded in our own doom... What now? Yet, I'm totally with him, and I don't really know why... it just works for me (I suspect it's the part about spurious memories, filled in retrospectively, and falsified... I like that, that feels right, somehow). Read a little more, if you would:


It was always my hope, in writing novels and stories that asked the question "What is reality?" to someday get an answer. This was the hope of of most of my readers, too. Years passed... But the problem is a real one, not a mere intellectual game. Because today we live in a society in which spurious realities are manufactured by the media, by governments, by big corporations, by religious groups, political groups — and the electronic hardware exists by which to deliver these pseudoworlds right into the heads of the reader, the viewer, the listener. Sometimes when I watch my eleven-year-old daughter watch TV, I wonder what she is being taught. The problem of miscuing; consider that. A TV program produced for adults is viewed by a small child. Half of what is said and done in the TV drama is probably misunderstood by the child. Maybe it's all misunderstood. And the thing is, Just how authentic is the information anyhow, even if the child correctly understood it? What is the relationship between the average TV situation comedy and reality? What about the cop shows? Cars are continually swerving out of control, crashing, and catching fire. The police are always good and they always win. Do not ignore that one point: The police always win. What a lesson that is. You should not fight authority, and even if you do, you will lose. The message here is, Be passive. And — cooperate. If Officer Baretta asks you for information, give it to him, because Officer Baretta is a good man and to be trusted. He loves you and you should love him.

Bringing capital T Truth or "reality" into living rooms and offices is not my objective. No-no-no. Rather, I want to — eventually, no hurry — create my own reality. Nothing to be preached or promised. There will be no fanfare. I'm not creating a product. I'm creating a lens. For me. A way of seeing. And listening. Speaking, moving, and so forth. In many ways, I'm still consumed by my tee vee teachings, my sleeplearning. Here's an example (and the raison d'être of this post — so please, if you made it this far, perk yourself): 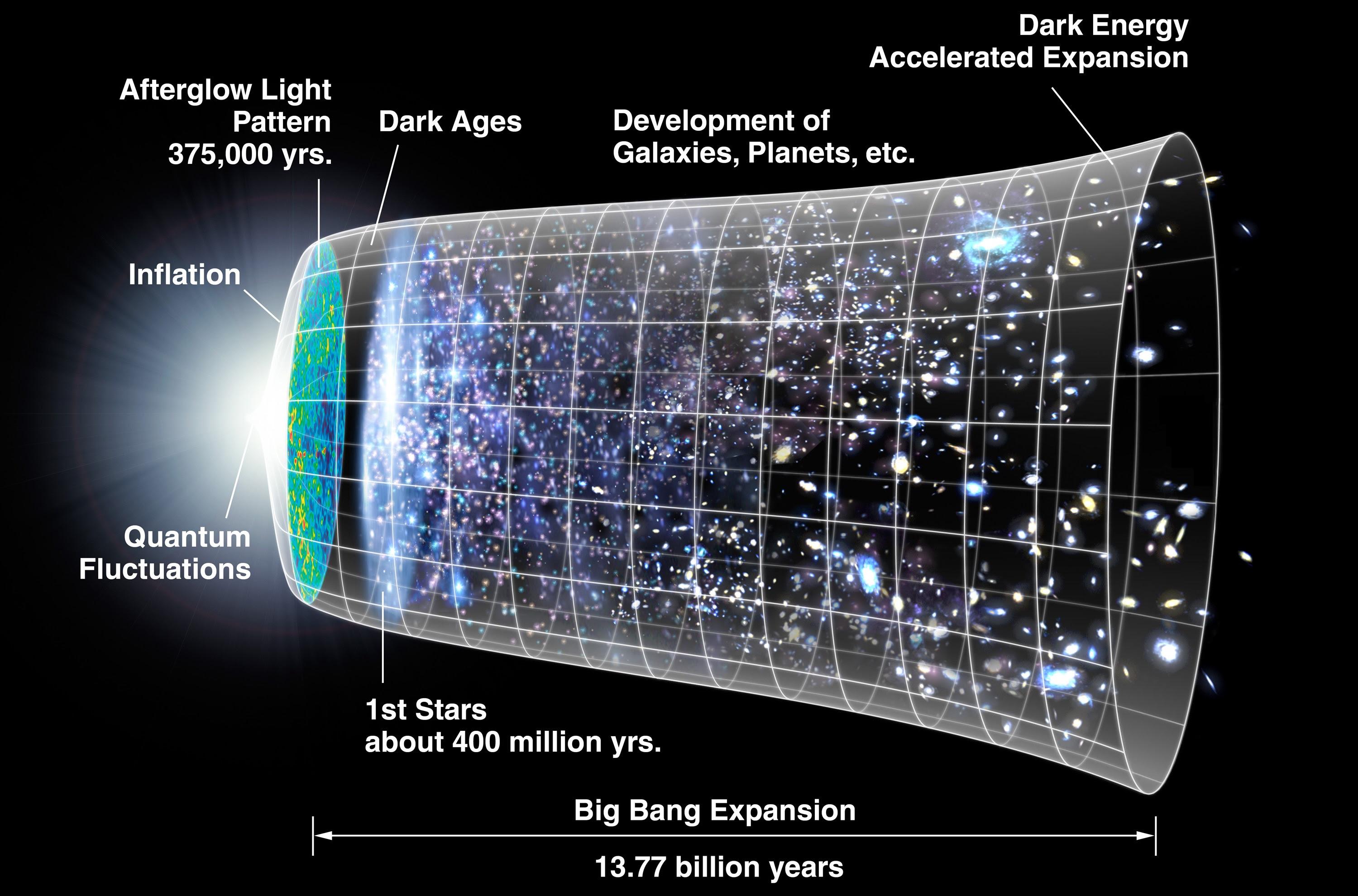 When I hear somebody reject a scientific explanation for the creation of the universe (specifically, rejecting it in favor of a religious/mythical explanation) my first reaction is to mock and laugh ("dumbass," my head voice scoffs). Now, this is a usable example of what the Tee Vee taught me*, because I have no fucking good reason for doing this. In fact, I too do not accept a scientific explanation for the creation of the universe (note: I don't reject it, I just don't accept it, because I don't understand). Look at that thing: the hilarity to your right is a visual helper, designed to help eager scientific minds comprehend a theory. I've spent some time (we're going all the way back to pre-dropped balls here) considering the creation of the universe. I love it. Great fun. Very challenging. I fail every fucking time. I simply don't understand. I can slowly wade into the info, build each idea, ask my college Physics professor lots of annoying questions... yet, I can't get there. If I have ever said, "I understand the basics of Big Bang cosmology," I was fucking lying. In the past, this is something I'm sure I have lied about, because I so badly wanted to understand, yet I fell short.

Despite this, to this day, if I hear someone take a crap on scientific explanations for "the big question", a snarky moan spurts through my head. I don't like this. Its facelessness is ugly (actually, it has a face... mine). So I have to hope that, somehow, I'll remember that I have no grounds for being so dismissive — such an asshole. That's what this blog is about, reducing the asshole who works the long, thoughtless hours of the auto-pilot shift.

* I don't literally mean "television taught me to think this way". Rather, I'm thinking of the things we learn less than consciously, behind our own backs.
Posted by what the Tee Vee taught at 12:45 PM