Plump months ago, I asked myself a question: "Would every single pre-20th century living-being size-you-up to be a completely worthless piece of shit?" My answer was yes. I wanted a new answer... achieving "probably" was my first target. Here we go:


1) Chickens. Four bawk-bawks prancing about... de-he-he-lightful. My not biological brother, wife-like partner (pictured above), and I built their shelter and run, allowing those silly birds a comfy place to put themselves to bed every night. The mysterious production of eggs does whatever it is it does. Goats are next.

2) Growing Food. For years, I lived in a place where everything that wasn't the house was ignored. It was space to pass through... rarely was it considered or enjoyed. Always background. I didn't know it.

That has changed. Digging the rapacious Japanese knotweed for a few months was delightful (I can see the hunter-gather amused by my absurd toil). My brother built stunning retaining walls (I was labour only on that project, this brother of mine can build a wall like a schizophrenic (I'm under the impression they're often phenomenally adept at this)). This is the first year that we've grown everything from seed. And with the broad expansion of our gardens (nearly 10x more square footage than before) we're thriving. Big ole' potato bin. Quinoa. Beans. Salad greens and veggies galore. Galore!

3) Canning. The local Goodwill stocked us well here, we have quite a nice jarring and pickling operation ready to go.

4) Tools. You need to borrow a tool? Seattle, via Craigslist, has us well-stocked. Thanks Seattle, for having way too much shit. 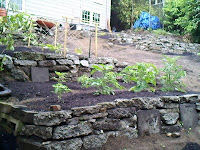 5) Boozin'. Dmitry Orlov, an eminently generous man who is largely responsible for getting me all ginned-up for these projects, emailed me a link to his family's vodka recipe. That's a' happenin'. And we're going to make a run at blackberry wine (something of an aperitif, good for cocktail mixin' too, I suspect)

6) I got my little bit of money out of the big banks and into a credit union.

7) All-bike-all-the-time. My body is as strong as it's ever been.

Since I am boasting, I needn't point out that I'm rather proud of what we've done. I am becoming progressively less useless.

1) Got a lot of kids away from the awful x terrible mindless mantra that pervades public schools: You MUST Go to College! All you need (other than pointing to the obvious decay in the world of fucking jobs and an economy that is — thankfully — collapsing), is to use this one from McLuhan, it does the trick:


The past went that-a-way. When faced with a totally new situation, we tend always to attach ourselves to the objects, to the flavor of the most recent past. We look at the present through a rear view mirror. We march backwards into the future.

Luminous, isn't it? And then we can move beyond all of that college-prep nonsense.

3) We also mimicked Raymond Queneau's Exercises in Style — the kids loved them some Doc Queneua — and their ability to find delight in the ways-of-words properly exploded (thanks to a sage, Daniel Coffeen, who did the same for me).

5) Select passages from Derrick Jensen's The Culture of Make Believe went a long way towards enabling my students to think about racism and exploitation — certainly the single greatest sense of accomplishment I've experienced in a classroom. Listening to oft-angry black teenagers lace together coherent and complex ideas on the nature of human destructiveness brought me some serious fucking joy.

Obviously, none of this stuff is approved curriculum (I barely even know what kind of bullshit I'm supposed to be teaching them, but I'm pretty sure the end product is multiple choice tests where I attempt to discern whether they know the difference between the "a" and the "o" in the names of Iranian clerics... or some such rote, power-strucutre-privilegin' bullshit (in haiku form).


Long before a thermonuclear war can come about, we have had to lay waste our own sanity. We begin with the children. It is imperative to catch them in time. Without the most thorough and rapid brainwashing their dirty minds would see through our dirty tricks. Children are not yet fools, but we shall turn them into imbeciles like ourselves, with high I.Q.s if possible.