I'm reading about Fred Phelps, the esteemed gentleman from Westboro Baptist Church — he's so highly regarded that the U.S. Supreme Court had him over for lunch. You do know who we're talking about? Phelps is the guy who gets the kids all ginned up to exercise their 1st amendment rights (teaching the kids citizenship. Virtuous, indeed) 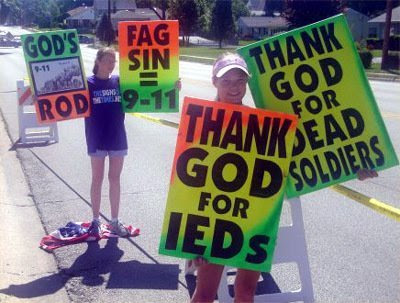 Cute kids. I wonder what their birthday parties look like. (I apologize for that unnecessary aside) I'm purusing Freddy's website (I was watching the Yankees game, causing my mashocistic juices to get antsy, here is one of many scrumptious nuggets):


Sodom’s sin wasn’t that the entire population of that thriving 5 city metropolis were practicing fags, their sin was that they all condoned it, to the point of trying to force everyone else, even angels, to love it (Gen. 19). When you’ve done that, you can only expect the same punishment Sodom received – destruction by fire.

I had a moment — it occurred to me: Fred Phelps is not only a good writer, he is. one. reasonable. fellow.

So he can do anything he wants... okay

And despite being able to create universes or watch any movie he wants, whenever he wants (just like Kim Jong), he simply can not get over the butt fucking. Try as he will (hey, he's huma — uhh...), God just can't get past that shit.

So, what to do? Erase Sodom and Gomorrah — done and done. End of story. No more B-F'ing. Now, just imagine (please, relax, close your eyes, and imagine) how God felt when he heard that men were still B-F'ing. I know, terribly uncool, he must have been crushed. After all God has done for us...

Now, you might think a cruel God would simply give up: destroy the planet, the solar system, the universe and start all over (it's only 6 days of work, no biggie). You, of course, would be wrong. Our Benevolent God wouldn't do such a thing — why punish good people like the Phelps family because of a few bad seeds? So, he only kills the bad people. I found myself reminded of a close childhood friend. This friend was totally like, "there's no reason to hate gay people, they're just living their lives, just like the rest of us." What happened to him? If you guessed, "his 16 year old body was destroyed in a gruesome freak accident, in front of his mother and friends — sending his soul straight to the fire chamber", you're spot on. See, God punishes those — like my friend — who deserve it. Praise Him.

God is omnipotent — his stage notes are precise, it's all scripted (except for the B-F'ing, he DID NOT script that, the B-Fers are ruining his whole production! At this rate, the show will be lucky to get through its first run, you can forget about hitting the road for a national tour). Thanks to the omnipotence factor: how else could you explain the world's death and suffering? Clearly, it's an expression of God's anger — no other possible explanations.

See how I did that... I got you. Just a little thing called logic. Fred Phelps taught me that. Preach on, Brother Fred.

What is wrong with me? I need to promise myself to stop doing this kind of shit. Everybody loses.
Posted by what the Tee Vee taught at 6:41 PM